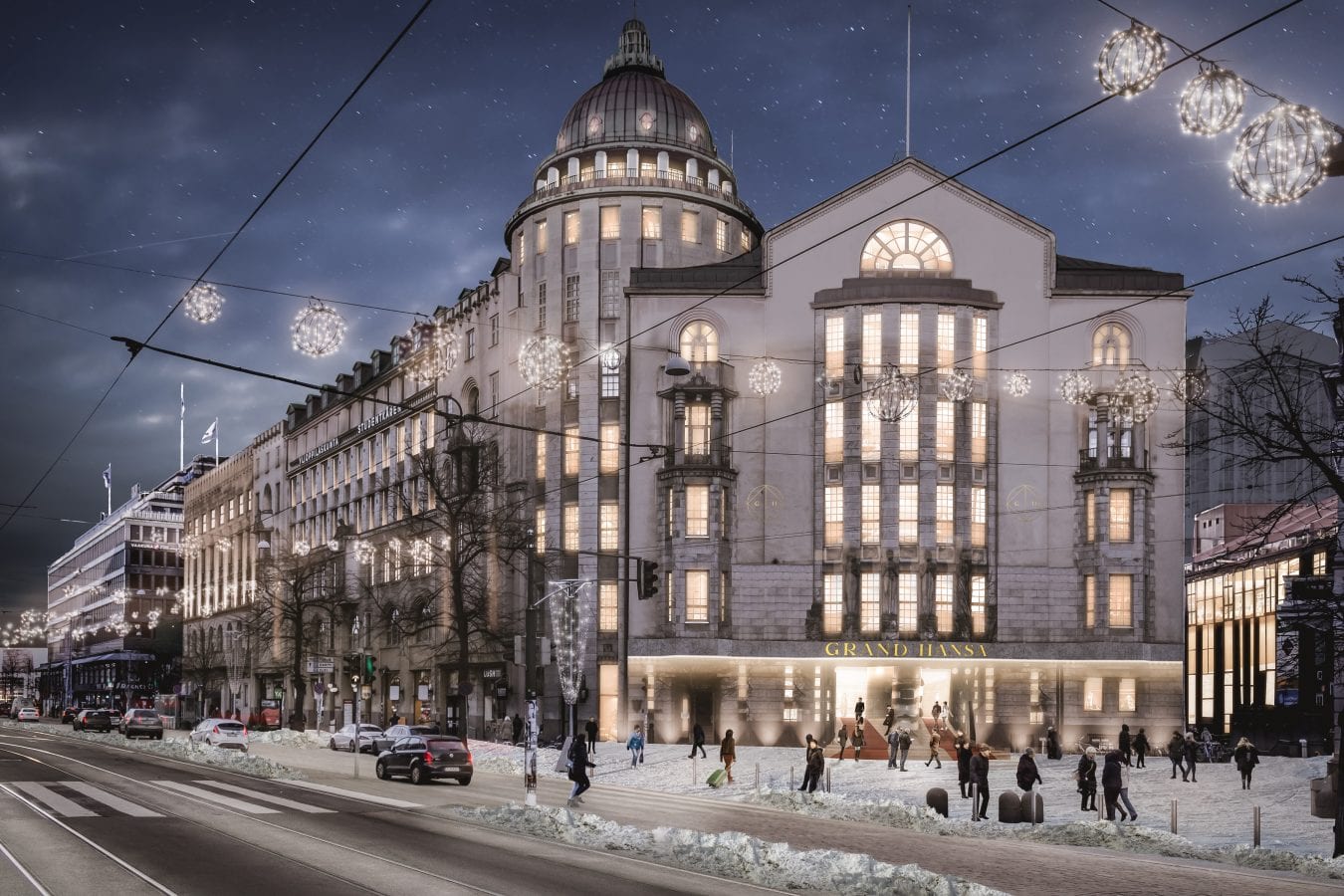 The topping out of Hotel Grand Hansa in central Helsinki will be celebrated on the worksite on 6 October. In Hakaniemi, the office building in the Lyyra city block reached its final rooftop height in summer 2022 and was topped out in September. Both projects will be completed during 2023.

The Grand Hansa project, which will combine the New Student House, the Kaleva building known as Hotel Seurahuone and the Hansatalo building, is proceeding on schedule. Its topping-out ceremony will take place on the site on 6 October.

“Hansatalo will gain three new stories as part of the renovation project. The rooftop extension is now complete, and work on site has moved to the building’s interiors. We saw this as the right time to celebrate its topping out”, explains Ylva’s Construction Manager Verneri Lehtovirta.

The Grand Hansa project will be fully completed in summer 2023. The cultural-historically significant buildings will be housing the first Hyatt hotel in Finland. The hotel’s operations will be run by the Finnish company Primehotels.

“When it opens, Hotel Grand Hansa will be a new, international high-class addition to Helsinki’s hotels that will increase the city’s attraction to both domestic and international tourists. At the same time, we will be restoring these historical city-centre properties to their original glory. We take pride in looking after this cultural property that is significant to the history of Helsinki as well as Finland as a whole,” says Ylva’s Real Estate Director Ville Vaarala.

Operations in the Lyyra office building to commence in January

The Lyyra city block, taking shape in the corner of Toinen linja and Porthaninkatu in Hakaniemi, is also rising from the ground up speedily. The first to be completed is the office building on the western side, with new tenants able to move in in early 2023.

“The office building reached its rooftop height in May, and work is well underway on the hotel and apartment building’s frame. We are looking forward to the moment towards the end of this year when both buildings have reached their full height and the weather protection can be taken down from the office building. That will be when you begin to see the area’s new cityscape for the first time,” Lehtovirta relates.

The Lyyra project will be completed by the end of 2023. The city block will bring numerous new services and restaurants to local residents’ doorstep. Businesses opening their doors at Lyyra include, among others, the high-quality food court UG that focuses on street food, Kakkugalleria, Fat Ramen and Finland’s first Citybox hotel.

“The Hakaniemi area will face significant regeneration in the coming years. Lyyra is the area’s first and so far only newbuild, and its facilities have sparked a lot of interest. Nearly all of the offices have already found their tenants,” rejoices Vaarala.

Responsibility has been considered particularly closely in both projects. Once finished, both Lyyra and Grand Hansa will be operating fully carbon-neutrally, and ambitious targets have been set for reducing the carbon footprint of their construction phase. Various ESG goals regarding carbon neutrality and staff satisfaction have been woven into the terms and conditions of Ylva’s funding. Alongside sustainable choices, also social responsibility has been paid attention to on the worksites: Lyyra and Grand Hansa are involved in the Inclusive Construction Site project, which is one of the pilot projects of the OECD’s Business 4 Inclusive Growth coalition (linked articles in Finnish).

Ylva’s goal is the construction of the Helsinki of the future. Our business operations focus on the real estate and restaurant businesses. Ylva is owned by the Student Union of the University of Helsinki. For 150 years already, we have been building a city for the people of Helsinki where people and ideas come together. For us, profitability means long-term decisions that will enable the following 150 years. Our unique background requires us to be pioneers in terms of openness and responsibility as well as commitment to the development of Helsinki. http://www.ylva.fi/en