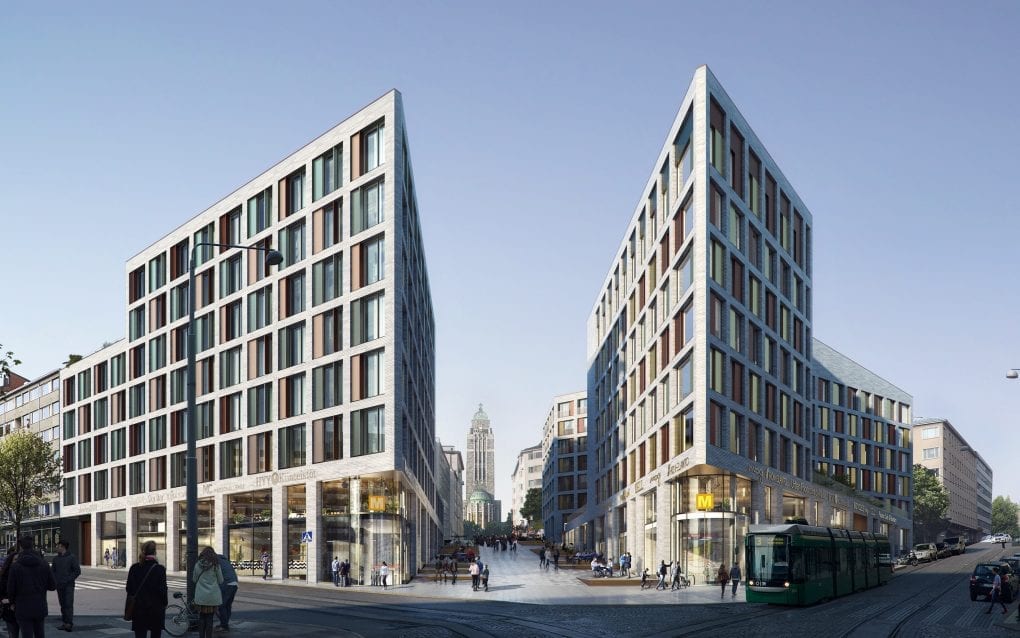 Ylva and its Lyyra project are the proposed winners of the plot competition to replace the Kallio office buildings. Lyyra would create an internationally attractive meeting place for science and companies in the centre of Hakaniemi and Kallio. The final decision on the winner is made by the Helsinki City Council.

The area of Hakaniemi and Kallio has so far had to wait for its turn in the construction of new Helsinki. With the plot assignment competition for the Kallio office buildings, the City is seeking new life to the area. In practice, this means new buildings and services at the corner of Porthaninkatu, Siltasaarenkatu and Kolmas linja as well as at Siltasaarenkatu 13 and Toinen linja 7.

“In Ylva, we believe that Helsinki’s success in international competition is based on the cooperation of science, research and companies. Lyyra, the city block of science and economy, would create an international community in the heart of Helsinki, producing an environment where ideas are formed and spread quickly. The resulting cooperation, unique in Finland, would benefit companies, the growth-seeking Helsinki and the region’s scientific community” CEO Antti Kerppola from Ylva envisions.

When completed, Lyyra will become an important meeting place and centre of services for the area of Hakaniemi and Kallio. We have already begun planning the services offered in Lyyra in cooperation with a large group of our partners during the competition stage. The next step for us is to develop Lyyra together with the residents, non-governmental organisations and companies of the area.

“Ylva has already spent 150 years building a city where people and ideas meet. For us, Lyyra is a great opportunity to demonstrate the pioneering attitude in transparency and responsibility that is in line with our values. Our goal is to create the perfect example of sustainable construction, with aspects such as energy consumption and transport connections designed to answer the demands of sustainable development. The final decision will be made by the City Council, but it would be fantastic to get to develop future Helsinki and to build Lyyra together with the residents of the city. We are anxiously awaiting the opportunity to invite local people and communities to join us in developing one of the most vibrant areas in the city” Kerppola states.

Three new buildings will be constructed on the plot to replace the current office buildings: a hotel, an office building and a residential building for international researchers. Lyyra’s total area is 20,800 floor square metres, which comprises the buildings themselves as well as underground facilities. We have made preliminary agreements with our partners for some of the premises during the planning stage of the project. Actual discussions on renting the premises will begin and the project be launched once the City Council has made its decision on the matter.

Demolition of the old buildings is scheduled for early 2020, and Lyyra is projected to be completed in 2022. Ylva acts as both the owner and developer of the project. The city block has been designed by the Cederqvist & Jäntti architectural firm, with Tom Cederqvist as the main architect. Sitowise, Fira, Realprojekti, Granlund and Demos Helsinki have also been involved in the design process.

“It is rare for an architect to get to design a new building into central Helsinki. Lyyra could, indeed, be described as a dream commission: a human-oriented and synergy-producing hybrid on the Unioninkatu axis, close to buildings designed by Sonck and Sirén. It has been very rewarding to develop this solution together with a competent and motivated team. We now have a good foundation to continue towards implementation” remarks Tom Cederqvist, the main architect of the project.

Ylva is responsible for the real estate and finance investment activities of the Student Union of the University of Helsinki. We have already spent 150 years building the residents of Helsinki a city where people and ideas meet. Our unique background requires us to be a pioneer of transparency and responsibility and to commit ourselves to the development of Helsinki. As a financially stable real estate developer, we are also in the position to do so. Our long-term development projects include the Kaivopiha city block, including the New and Old Student House, in downtown Helsinki, Domus Gaudium in Kamppi, student housing and the Mechelininkatu 3D-HUB. We also own cultural-historically significant properties in Jollas and Tuusula. We have improved our profitability for three consecutive years, and our investments are at a record high.

The Siltasaarenportti competition is organised by the City for the two plots in Kallio that are located at Toinen linja 7 and Siltasaarenkatu 13 and are currently in office use.

Ylva’s Lyyra project is being proposed to the Urban Environment Committee as the winner. There were three contestants in total in the final stage of the competition.

The Lyyra project promises to build a city block of science and economy in Kallio.

The website of the project at www.lyyra.fi contains more detailed perspective sketches, a video and the competition proposal in its entirety.